Welcome to the student/parent access page for videos by educational comedian, Keith Deltano. Students and parents with access codes provided by the teacher/school please use the access portal below to view the videos that have been chosen for you. 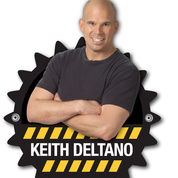 Keith Deltano is a winner of the teaching excellence award and has served and worked with youth as a public school teacher, private counselor, youth worker, and US Army Airborne Military Police Officer.

Keith stayed back in third grade and struggled with Dyslexia, ADHD, CAPD (Central Audio Processing Disorder) and OCD. He was told by his high school guidance counselor he would never go to college and was involved with several self-destructive behaviors during his high school years. Keith went on to excel as a United States Army Paratrooper, took advantage of Army matching funds to get the money needed for college, and eventually became an award winning public school teacher and internationally acclaimed educational comedian.